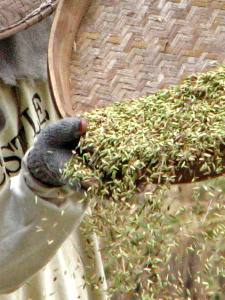 To winnow is “to separate or distinguish”, “to analyze critically”. But it can also just mean “to fan” or “blow away”, especially to separate grain from dirt “by throwing it into the air and allowing the wind or a forced current of air to blow away impurities”.

Not only have I never heard this word before, but I’ve also never heard of separating grain that way. I don’t know much about farming. :P According to Wikipedia’s entry on winnowing, the practice was developed in ancient times. Latin even had a word, vanuus, meaning “winnowing fan” (a shaped basket used to shake and separate the grain from the inedible parts).

I love how this ancient word is still used today in a modern context – for example, in headlines like “Primary to Winnow the Field of Candidates”. Isn’t it fun to imagine presidential candidates being tossed into the wind to separate the good from the bad?