This sounds like an SAT word if I ever memorized one: reticent, an adjective meaning “restrained”, “reluctant”, or “disposed to be silent or not to speak freely”. The noun form is reticence. 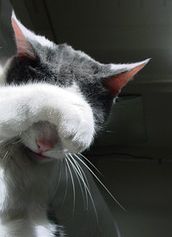 According to the Online Etymology Dictionary, the word comes from Latin reticere, meaning “keep silent”, from the re- prefix and tacere, meaning “be silent”. The words tacit and taciturn also stem from that Latin root.

World Wide Words points out that even though some dictionaries define reticent as “reluctant”, many believe that it shouldn’t be used that way. “Reticent refers to a subset of the meaning of reluctant. Compare ‘He