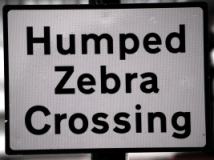 Some examples found on Google News include “America’s abstruse tax code”, “abstruse terms and conditions”, and “abstruse mathematics”. The abstruse sign pictured on the left is another prime example of something that’s hard to understand.

Interestingly, abstruse and extrude both share a Latin root: trudere, which means “to thrust” or “to push”. So abstruse literally means “to thrust away”, while extrude means “to thrust out”. The word extrude matches its literal Latin meaning perfectly, but abstruse doesn’t. How does “thrust away” mean “hard to understand”? Well, it turns out that abstruse has a second, obsolete meaning: “hidden”. I imagine an old book pushed under the bed, hidden from sight.