Yesterday I just reviewed a couple of the things I don’t know about JavaScript, but I didn’t get around to answering any of my own questions yet. So today feels like a good day to get back to reading Eloquent JavaScript, an excellent free book written by Marijn Haverbeke. I left off on Chapter 3, which is all about functions.

##Functions in a Nutshell

I love Haverbeke’s description of a function as “a piece of program wrapped in a value” to be used and reused later. But the mathematical definition of a function that I learned in school still applies: “a relation that associates an input to a single output according to some rule.” 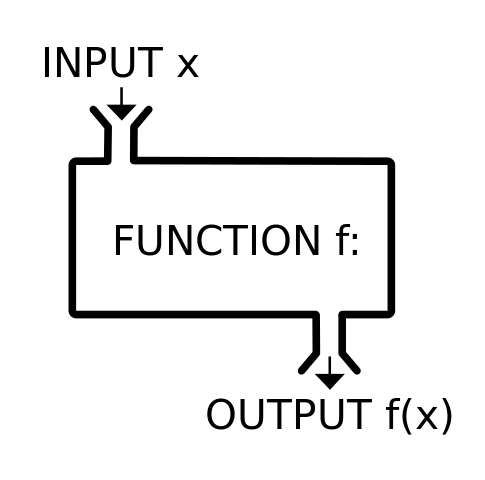 A function is often described as a black box that turns one thing into another thing. Once the black box has been created, we can safely ignore its inner workings and focus instead on its inputs and outputs, treating the black boxes as building blocks to create more complex systems while keeping them modular and extensible.

So that’s all well and good. I feel pretty comfortable with the general idea of functions, and I got some good practice writing my own functions in JavaScript during my 30 Days of Web Dev challenge. But there are still many details that I don’t understand.

Yesterday I noted my confusion over the different ways to define functions:

And according to this StackOverflow post, the first version (or function definition) is also called an “anonymous function expression”. Whew, what a mouthful of vague terms!

Anyhow, the most important difference between the two can be summed up with one word: hoisting. Another excellent book called You Don’t Know JS has a great chapter on hoisting, with the following example:

As You Don’t Know JS says, “There’s a temptation to think that all of the code you see in a JavaScript program is interpreted line-by-line, top-down in order”, but that’s not always true! In JavaScript, declarations are hoisted to the top before the rest of the code is executed. “That means that you are able to use a function or a variable before it has been declared,” says the MDN Glossary.

The above example illustrates the hoisting of the variable declaration; now here’s an example of hoisting a function declaration, as illustrated in Eloquent JavaScript:

The above code works because declarations are run before the rest of the code. As Haverbeke writes, “This is sometimes useful because it gives us the freedom to order code in a way that seems meaningful, without worrying about having to define all functions above their first use.”

He also warns not to use function declarations inside conditional blocks or loops, because browsers don’t handle it consistently and so things are likely to break! I’ll definitely try to remember that.

Hurray, I now (sort of) understand the difference between function definitions and function declarations!

But in answering that one question, I’ve uncovered many more!

I have plenty more questions, but it’s Friday and I want to do some other fun stuff tonight! So I think I’ll give my brain some time to digest what I read today.